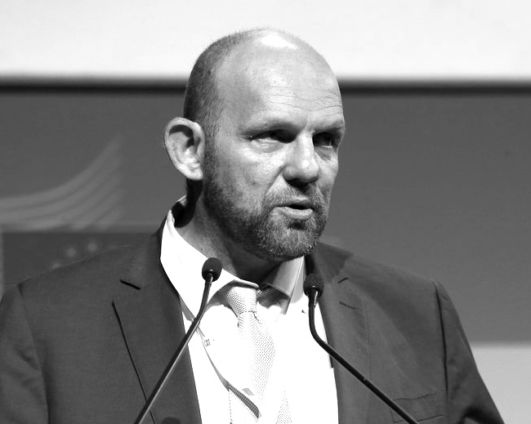 Jean-David Malo studied in the Institut National Supérieur des Sciences Economiques et Commerciales (Paris) and the University of California (Berkeley).
He started his career as Head of internal control management in the Comité Professionnel de la Distribution de Carburants in France before joining ARMINES, a body managing contractual research and innovation for French engineering schools (Ecoles des MInes, Ecole Polytechnique, ENSTA, …), where he created, developed and managed the European Affairs Directorate.  He joined the European Commission in January 2001. In the Directorate General for Research, he participated actively to a number of developments on the design of funding instruments, rules for participation, funding schemes, etc, both for FP6 and FP7.  From 2003 to 2006, he was the assistant of Director Robert-Jan SMITS. After heading the unit in charge of the regional aspects of FP7, ie. the “Regions of Knowledge” and “Research Potential” programmes, from 2006 to 2010, he was managing from 2011 to 2013 a newly created unit in DG Research and Innovation, the main objective  of which was to contribute to increase private finance and close market gaps in investing in research and innovation by expanding the scope and scale of existing EU innovative financial instruments (like the Risk-Sharing Finance Facility) and by developing new ones in the fields of debt (including guarantees) and equity financing, notably in the context of Horizon 2020 (“InnovFin”). The EU state aid framework, tax incentive schemes and philanthropic funding were also areas covered by the work of the unit. From 2014, this unit was also covering the SMEs dimension of Horizon 2020, including in particular EUROSTARS II and the design and coordination of the SME Instrument and the Fast Track to Innovation pilot. On February 2017 he has been appointed as Director of the Directorate in charge of “Open Innovation and Open Science”. The European Innovation Council, the Pan-European Venture Capital Fund(s)-of-Funds Programme, the RDI dimension under the European Fund for Strategic investments, the European Open Science Cloud, the long-term sustainable investments for Research Infrastructures, the monitoring of the ERA Roadmaps, etc… are among the various files he is in charge of or contributing to.